Been too busy actually seeing movies to post much, but now it's time to pay the piper. Despite the skippability of so much--Lady in the Water, a no-hoper from the get-go and further proof that its auteur has lost whatever smarts he had left after the dreadful The Village, is already exiting my local cineplex, and for the first time ever I'm thumbing my nose at a Woody Allen film, which I should have done about a half-dozen credits or so; Match Point wasn't that good--the indie scene is fairly lively, and there are one or two decent movies in the malls, too. A look, with a French accent.

Clerks II (The Weinstein Company). Now in their early 30's, and at the point where extended adolescence congeals into a semi-permanent state, Dante (Brian O'Halloran) and Randal (Jeff Anderson)--well, Dante--ponder their options, this time behind the counter at a tacky fast-food chain. The references have changed--The Lord of the Rings and The Silence of the Lambs get a good going-over--but the scattershot, hit-and-miss format hasn't. Between gross-out gags involving "inter-species erotica" and cameo customers like Jason Lee, Ben Affleck, and the everywhere-all-at-once Wanda Sykes, writer-director Kevin Smith lets the sadness of resignation seep in, and the possibility of change, represented by pedicure-happy supervisor Becky (Rosario Dawson), who tests Dante's plans to relocate to Florida with girlfriend Emma (played by Smith's tough-as-fake nails wife Jennifer Schwalbach). The sequel is fortunate in the casually sexy Dawson, who, unlike the game but professionally amateurish O'Halloran and Anderson, has the skill to negotiate the shallower sections of the script. (Though Jay and Silent Bob can be counted on for their Mutt-and-Jeff act, the comedy honors are pretty much claimed by newcomer Trevor Fehrman, as Elias, an easily bamboozled fry cook, who is under the delusion that his girlfriend's virginity is guarded by trolls. His reaction shots are often funnier than the material, which may be how he got the job.) Confirming that a good ending can make up for a multitude of venal sins, however, Clerks II very deftly pulls itself together for a genuinely touching and warm-hearted conclusion, not an easy bar to reach after a leather-bound stud and his donkey have reached a different kind of climax. Maybe Smith, like Michael Apted and his "Up" documentaries, should revisit the Quick Stop every decade or so. 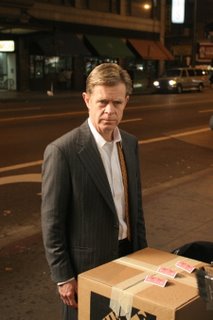 Edmond (First Independent Pictures). Mamet-land, where words, rather than fists, are thrown. Racial slurs that have very arguably been "reclaimed" by the popular culture still pack a wallop in an adaptation of his 1982 play, directed by his frequent stage collaborator, Stuart Gordon, one of the friendliest people I have ever interviewed. Gordon is best known for his two earliest films, the sprightly horrific Re-animator and From Beyond, and the visual shock effects here have jack-in-the-box jolt to them. But indie cinema has changed, and what took a modest cast and crew to pull off then today requires 20 producers of various kinds and a troupe of recognizable faces and/or names (Denise Richards, Bai Ling, Mena Suvari, Re-animator star Jeffrey Combs, etc.), whose brief appearances work against the anonymity of the seamy urban underbelly the self-loathing Edmond (William H. Macy, wired to combust) willfully rips into. Gripping (the mutually assured destruction between Macy and Julia Stiles, in one of the larger roles, and the very sly way Bokeem Woodbine plays a savior figure, especially), screwy (in its time- and place-warped way), and, depending on your taste, either content-rich or hopelessly impoverished. Given accomplished work (Bobby Johnston's jazz score and hard-edged lighting, by Denis Maloney, are also exemplary) I lean toward the former, but it's hard to imagine wanting to spend another 82 minutes in Edmond's disagreeable company to confirm my opinion. By the way, I held onto my From Beyond promotional souvenir hat, with its grotesque pop-out "third eye," for many years, and wonder what I could get for it on eBay. 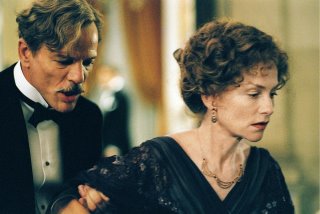 Gabrielle (IFC Films). Infidelity is a theme of this Joseph Conrad adaptation. Alas, the director and co-writer, Patrice Chereau, follows suit by breaking faith with the material, introducing grating, inappropriate music and flashing words like giant text nessages across the screen, as if he distrusted its ability to hold an audience's attention. Wrong. Isabelle Huppert, who as always acts as if some strange force has entered her body and is trying to exert full control through her intense eyes (I mean this as a compliment; she is stunning in a remote way I cannot comprehend after 30 years of immaculate performances) is Gabrielle, who after 10 years has walked out on her marriage to the stuffy, pompous, stifling Jean (Pascal Greggory, with a manner like a vise)--the trouble really starts when she just as abruptly walks back in, setting off tremors that extend beyond their chilly relationship to their 19th century social circle. I was captivated, by the psychological warfare waged by the two leads (both faultless) and Eric Gautier's slightly smudgy cinematography, which removes the Merchant-Ivory-ish gloss off the formally appointed parlors and bedrooms, and resented Chereau's juvenile intrusions. If only Chereau (who made my favorite historical drama of recent years, 1994's Queen Margot, but has been otherwise erratic) had dared to be unhip and made a true chamber piece, one that sucks the air right out of the theater and leaves you gasping after 90 minutes. Movies like this should kill you.

Heading South (Shadow Distribution Inc.). Laurent Cantet's followup to his excellent films about working life, Human Resources and Time Out, has been misread. It is a continuation, and not a departure, from those movies, moving from the office to a hazier, but no less entrenched, economy where gifts and money are traded for sex. And, much as a recent, well-intentioned New York Times Style section piece tried to turn it into some sort of sizzler about older women and younger lovers, Heading South is no day at the beach; if anything, it's cold water thrown at the likes of How Stella Got Her Groove Back (whose author eventually found out, the hard way, about the limits to frolicking with toy boys who turn out to have minds, and inclinations, of their own). There is a little May-October nudity and hanky panky, but much of the mutual seduction is a matter of hands playing lightly across backs, and business being transacted from white to black hands just as discreetly. The film is at its most absorbing when it shows how each of the participants in these games of fantasy and commerce, including queen bee Ellen (a cattier, chattier Charlotte Rampling than usual), the searching Brenda (Karen Young, excellent even in a difficult, romance novel-type monologue), thrill-seeker Sue (Louise Portal), and lust object Legba (Menothy Cesar), get something from the deal; less so in blaming "American dollars" for the corruption that annihilates the playground that Haiti's beaches seemed to be in the mid-1970s. [Dumping its ills entirely on North America isn't going to solve its ongoing plight; as it was, the filmmakers were forced to decamp to Santo Domingo when local conditions worsened.] The politics, like the sex and the yearning that underlies it, might have better served behind closed doors, but Heading South is a more thoughtful, much less empty-headed piece than I had been lead to believe from the largely dismissive reviews.

Monster House (Columbia). I'm so over the digitally animated adventures of talking cars, animals, and bugs, but a monster house possessed by the spirit of a rumbling and growling Kathleen Turner, that uproots itself to chase screaming little kids around the block, and in 3D no less in select theaters (Brooklyn's Flatbush Pavilion has a superb set-up)...well, I am so there. I've been fascinated by 3D since my parents took me to see the revival of 1953's House of Wax in 1982, which kicked off a brief revival of the format and movies like Friday the 13th Part III and Jaws 3-D, all of which I donned glasses for. The third dimension has made a comeback recently, with Monster House the second feature to extend executive producer Robert Zemeckis' motion capture photography effects (as seen in The Polar Express) to the realm of flying objects. But the best 3D is more than that, and Monster House also uses the format more subtly, to create an immersive, tactile world. The story--kids, a little less doll-like than in Express, trying to find out the secret of that people-eating house and its grouchy owner (cantakerously voiced by Steve Buscemi)--is slight, but felt, with a feel for how gawky preadolescents talk and relate (the movie pushes against its PG rating, a reminder of what that rating was before the more restrictive PG-13 was introduced in 1984). I'd call the action overly derivative of executive producer Steven Spielberg if only I weren't pleased to find someone (debut director Gil Kenan) working in that classical style, one largely abandoned for gobs of frenetically edited CGI. Not a big deal, but a pleasant summer breeze. A motion-captured Maggie Gyllenhaal is very funny as an insolent babysitter, prime house bait. Sign me up for this Halloween's revival of Tim Burton's The Nightmare Before Christmas, reworked for 3D. 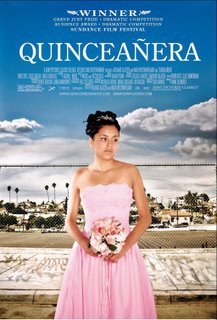 Quiceanera (Sony Pictures Classics; opens August 4). A Mexican-American girl's 15th birthday, a major celebration, touches off family strife, and reconciliation, in this Sundance hit, which co-writers and -directors Richard Glatzer and Wash Westmoreland patterned after the kitchen sink dramas produced in England in the late 1950's and early '60s. But the Echo Park neighborhood in Los Angeles where the filmmakers live, and shot the movie, is no drab flatlands of council flats, and Eric Steelberg's assured digital cinematography bursts with color. The storyline, in which celebrant Magdalena (Emily Rios) finds herself with child in an apparent virgin birth, strains the purported realism. More down-to-earth is her affection for her great-great uncle Tomas (a lovely performance by Sam Peckinpah veteran Chalo Gonzalez), who she lives with after being kicked out by her father, and the Heading South-type interaction of her fellow castaway, gay cousin Carlos (Jesse Garcia), with the homosexual landowners of Tomas' modest, but cheerily gardened, rental house. Without condescending, the filmmakers behind 2001's The Fluffer, a dreamy Boogie Nights drama set in the world of gay porn (where Westmoreland learned his trade), alight on a more affectionately observed community, which returns the favor by opening itself up to us.
Posted by Robert Cashill at 5:46 PM