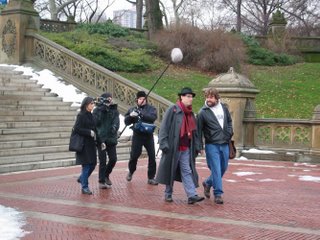 At age 50, playwright and liberal activist Tony Kushner is a little young for documentary treatment--but if the likes of Jessica Simpson can snag an hour on E! for their accomplishments, I can't begrudge an hour-and-a-half in the company of one of America's finest authors. As it happens, seeing both parts of his epic "fantasia" Angels in America, which I caught on a Wednesday matinee and evening toward the end of its Broadway run in 1994, is one of the best experiences I have ever had in my life. Note that I didn't add the qualifier "theatrical" before "experiences"--it was this monumental production, so full of life and art and anger and love and showbiz, that really got me interested in the theater, and that really made me think about the many issues it enveloped, and I can truly say I emerged a better (or at least, more thoughtful) person from having seen it.

Freida Lee Mock's unashamedly admiring Wrestling With Angels: Playwright Tony Kushner, which opens Oct. 4 at Manhattan's Film Forum, was filmed about a decade after this breakthrough, and offers a picture of the writer juggling various projects from just after 9/11 to the 2004 presidential election. Mock, an Oscar winner for Maya Lin: A Strong Clear Vision, typically captures Kushner in mid-stride, hurdling from his Union Square office or upstate New York home to attend to, among others, his play Homebody/Kabul; Mike Nichols' very fine HBO film of Angels in America (the photo shows him, center, visiting its Central Park location); an adaptation of Brundibar, a children's opera designed by Maurice Sendak, and based on a production the youngest victims of the Holocaust performed in captivity; and the musical Caroline, or Change, which encompasses some of his boyhood in Louisiana.

Personal recollections are fleeting. We hear a little about his troubled relationship with his musician father, a rift, caused by Kushner's homosexuality, that healed. We see his wedding ceremony to his life partner, but hear nothing from either man about what they mean to each other. Kushner has a lot of barbed, funny, and generous things to say about the U.S. political scene and the many issues addressed in his work, but is largely discreet about himself. This is one portrait that lacks an animating brushstroke, the stuff of life to make it more fascinating on the celluloid canvas. (There is his weight fluctuation, which rises and falls from scene to scene and is attended to by his "fat doctor,", but what I wanted was more of his inner life.)

In an interview in today's New York Times, Kushner quite rightly laments the absence of critical voices in the film. Mock's lame response is that no controversies arose during the filming. No go. For openers, Mock might have sat down with Times reviewer Ben Brantley, whose appraisal of Caroline, or Change, a Broadway flop after its mixed reception off Broadway at the Public, was withering (and close to my own opinion). All we get is the good news from Frank Rich, and everyone else; surely a member of the right could have been found as a rebuttal witness?

The inescapable flaw with Wrestling With Angels is that filming ended a year too soon. I wanted to hear from Kushner on Katrina, not to mention the 2004 election; we see him at the polling stations but there's no followup on the crushing day after. And his script for Steven Spielberg's Munich was a lightning rod for controversy on the left and the right. Mock, a worshipper, plays too easily into Kushner's reticence; these are just three issues that might have forced her to get off her knees and take the full measure of the man.

Or, Mock could have interviewed me—or any of a dozen members of the theatre's critical community—who would have been happy to offer an assessment of Kushner as perhaps the most overrated, hopelessly coddled theatre artist of our time. Less than useless was interviewing Frank Rich, who is a Kushner apologist and whose constant championed of the playwright satisfies Rich's king-making needs.

Get with the program, Brooks. Kushner is a living legend. The movie should have been three hours long, with songs, like Kushner's recent adaptation of Mother Courage.