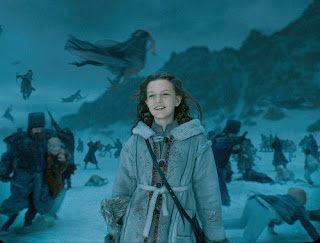 I think I know why The Golden Compass is rudderless at the boxoffice. It's not that it's any worse than the Harry Potter films or The Chronicles of Narnia, if not nearly up to the level of the Rings pictures. It's not that it's more about girls than boys. It's not that it's blasphemous or irreligious; nothing to get the racks out over here, at least on film. (There's more talk of souls than there is in a Sunday school lesson. Mitt Romney and Mike Huckabee could bond over it.)

It's not that the production is cheap or cheesy. In fact, the CGI polar bears, monkeys, cats, etc., are outstanding, and Hollywood should make them the template on which all future beasts are based, economizing all around. They're the best of the current menagerie found in Enchanted and Alvin and the Chipmunks--whose characters, not part of the national conversation since about 1972, got a big boost from the audience-friendly response to Pip the squeaking chipmunk in the princess picture. But I digress.

It's not that the marketing failed to distinguish it from other, less ambitious pictures based on books half-remembered from childhood, like The Dark is Rising (terrific novels, by the way, worthy of classier treatment). It's certainly not the under two-hour running time, which I appreciated, though a few more minutes spent on the complicated exposition might have been of benefit.

It's not even that the presence of Nicole Kidman in a movie is a reliable flop indicator, one that put the zotz on Daniel Craig twice this year. Mitigating factor: The two actors are only in the film for about a half-hour apiece (Craig's Casino Royale co-star, Eva Green, is only in Compass for about 15, giving more face time to the kids and the bears.)

No, it's that the characters in its near-Earth zip around in airships. I've wracked my brain, but I cannot recall a single successful film involving a zeppelin. 1971's Zeppelin crashed and burned. Not the recent Southland Tales and its apparent model, 1930's Madam Satan, a fun but lesser Cecil B. DeMille picture. Not the true-life The Red Tent or The Hindenburg. A View to a Kill ended Roger Moore's tenure as Bond on a deflationary note. One of my favorite thrillers, the blimp-set Black Sunday, never got airborne with viewers.

I love the idea of airships and enjoy looking at them in movies. But indulging my interest comes at a steep cost. Note to filmmakers: If your script has a part for a zeppelin, get rewrite and seek alternate transportation.
Posted by Robert Cashill at 1:41 PM