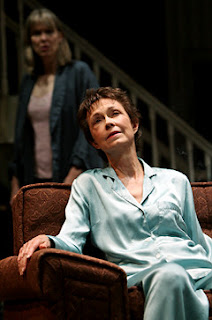 The nominations for the 2007-2008 season Tony Awards are out today, and I think it's true: The Drama Desks really are a bellwether for the Broadway event. Not for those of us who are Drama Desk nominators, mind you--our nominations are a solid mix of Broadway, Off Broadway, and Off Off Broadway shows--but for the Tony nominators, who seemed to have split the difference with us. We went for Cheyenne Jackson in Xanadu; they went for Kerry Butler. We gave the nod to Kevin Kline's Cyrano; The Tonys embraced Patrick Stewart's Macbeth. We nommed Marisa Tomei for Top Girls, they nommed Martha Plimpton for the same show. We dined out on A Catered Affair; they got all choked up over Cry-Baby.

A poor choice by the way, whatever support it has from the chattering classes. The reasoning must be that A) Rob Ashford's standout choreography, which we did nominate, will look good on TV, and B) the show could tour, if it gets enough audience support here. But it really shouldn't--a bad movie has made for a significantly worse musical. The nomination of Grease for best revival is equally embarrassing, but apparently Tony voters are obliged to vote for a full slate of nominees in all categories, quality be damned, so it got in on that outdated technicality.

Then again, I'm not knocking my brethren. I now know something about the calculus of awards decision-making now, and even if the Tony voters had only 35 shows to consider--a walk in the park, an obligation I could fulfill standing on my head--there are calls to be made, even if they turn out all wonky. But I must say that, with those same shows to consider plus hundreds more, our Broadway choices are a wiser mix. (And I must say that, as our nominations seem but a distant memory now.) It's better, I think, to have six discerning nominators rather than a committee of 21. That, however, is showbiz, and how different sets of rules play out.

*No surprise that August: Osage County and its powerhouse ladies, Amy Morton and Deanna Dunagan (pictured), were nominated. And no surprise that In the Heights got shown major love, too, after setting toes tapping at last year's Drama Desk awards. I did think it played better on Broadway, with the addition (finally) of a song for veteran co-star Priscilla Lopez, but not that much better. Too sugar-spun for my palate.

*So-called "mistakes" made by us were duly "corrected". (Broadway lovers can't see past our mandate of across-the-board excellence.) S. Epatha Merkerson got a slot, and The Seafarer found somewhat safer harbor. No suck luck, again, for the not-too-loved Cat on a Hot Tin Roof or November or the other shows that tumbled through the cracks, though Cat's James Earl Jones is getting a special award at our ceremony this Sunday. So, DD doubters: Did Tony get it wrong, too, or could it be that the shows just didn't add up?

*I liked Stew's performance in Passing Strange, but co-star (and co-Stew) Daniel Breaker does the heavier, leading-man lifting.

*Design dish: The 39 Steps is strong in every way except the minimal Tony-nominated set. The Tonys are to be commended for joining the 20th century a few years late and honoring sound, with play choices that should please Anglophiles. This I give to the Tonys: It distinguishes between design elements in a play and a musical, something the Drama Desk should do (and does do with sets), given the vast quantity of shows considered. On the other hand, only the Drama Desk honors projection, as of this this season.

The Drama Desk Awards are this Sunday, May 18. The Tonys are on June 15.
Posted by Robert Cashill at 8:51 AM