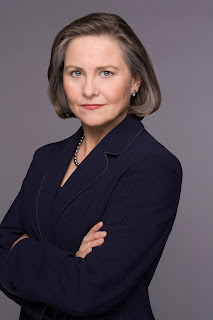 I've always been indifferent to the Emmys, which interrupt the new TV season just as it's getting started with reruns from the year past. Instead of tuning in, I watched the new-edition Bob Hope, Neil Patrick Harris, in the winning Dr. Horrible's Sing-Along Blog on DVD. Yawn: 30 Rock, a smug show whose appeal I'll never understand, won again, as did Mad Men, Bryan Cranston, Glenn Close, Alec Baldwin--good Christ, what a bore! I think prior winners should be obliged to stand down from time to time, or voters should be forced to broaden their lazy, inbred viewing habits. But congratulations to Cherry Jones (pictured) for her win for 24--luckily for the lengthening-in-the-tooth show, one I stick with year after year like one of those lazy, inbred Emmy voters, she's back again this season as the leader of the free world (and front runner for a second, too-lazy-and-inbred-to-consider-someone-else trophy).
Posted by Robert Cashill at 11:08 PM