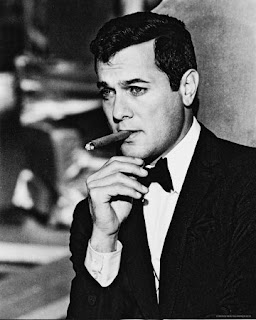 I can only hope that the passing of a genuine star will halt the distressing series of deaths this week. That stardom, and all the notoriety that entailed, tended to eclipse the career, but if we lop off the peripheral final decades (save for scene-stealing parts in 1976's The Last Tycoon, besting an array of old and new Hollywood talent, and Nicolas Roeg's Insignificance in 1985) we find a strong and varied core of work: comedies (Some Like It Hot), hard-hitting dramas (The Defiant Ones, his Oscar nominee), fun popcorn pictures (The Vikings, which my movie group adored when I showed it a few years back), epics (Spartacus), true crime films (The Boston Strangler)...and those are just one of each. A word, too, for his standout performance in the Ira Hayes biopic The Outsider (1960). And no one forgets the relentless Sidney Falco, in Sweet Smell of Success. "Match me, Sidney"...at his best Curtis was matchless.
Posted by Robert Cashill at 10:33 AM