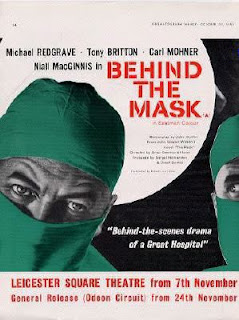 I'm fascinated by movies that fail to merit any external reviews on the Internet Movie Database. What did they do to earn such obscurity? Such a one was Jules Dassin's Uptight (1968). I drew from Roger Ebert's review of it, but it wasn't until I posted my own, in 2008, that his review was linked to the section, along with another. It's not the first time I'd done this; I'm a do-gooder, and I like to do good by these orphaned productions.

Today I came across something I'd never seen before: A movie that lacked not just external reviews, but user reviews. Someone, somewhere, posts something on every movie out there, no matter how obscure. It's as if Behind the Mask (1958) never existed, as I discovered as TCM broadcast a tatty old print of it early Saturday morning and I looked it up. "That's not right," I thought. "An injustice."

Time to set things straight and go...behind the mask. Who ya gonna call?

For the record, this is a British hospital drama, an undistinguished British hospital drama--but there are plenty of undistinguished British hospital dramas that have some adherents on the IMDb. And this one does have one point of distinction, not a small one, either. It was the first feature film appearance of a 21-year-old Vanessa Redgrave (besides some sort of fashion model short two years earlier) and I think her only film alongside her father, Michael Redgrave. (I'd clarify this but the new and not-so-improved IMDb has removed the old version's most useful feature, the ability to look up collaborations.) Playing the concerned daughter of Michael's chief of surgery--he's ailing from the stress and strain of dealing with a new and uncooperative administration, and is watchfully grooming her fiance for a top surgical slot--she's appealing even in the decayed color of the print viewed and completely unformed, a hatchling, with a twee and girlish voice. She wouldn't make another film for eight years; by Morgan! (1966), she was more herself. (Maggie Smith had a similar trajectory, dipping her toes into movies at the same time then leaving them behind for about as long, both going back to win Oscars.)

Behind the Mask was also the debut film of veteran character actress Margaret Tyzack. Redgrave pere is his usual self. There are subplots involving the death of a patient and a doctor hopped up on drugs, which grays his hair and leaves him wild-eyed. Brian Desmond Hurst, who helmed the definitive version of A Christmas Carol in 1951, directed, less memorably this time.

That should do it. Stand up and be counted, Behind the Mask.

UPDATE: Done! Vanessa Redgrave should seriously thank me for this.

FURTHER UPDATE: The director's great-great nephew wrote me on Facebook to thank me for my review. Since it was posted a user review has appeared, too. The Mask is uncloaked.
Posted by Robert Cashill at 5:29 PM

Labels: Behind the Mask, IMDb