Remember that Brooklyn Heights-set horror movie The Sentinel (1977), where the doorway to hell was located in a genteel brownstone? Hell has been relocated a few blocks, to the dreaded UA Court Street Stadium 12 multiplex, hated by discerning moviegoers. I know enough to avoid it (and most multiplexes) on weekends, but yesterday's noon jaunt to see the (eh) Super 8 was a nightmare of slowpoke ticket-taking and molasses-paced concession sales that made me 15 minutes late for the movie. Irritated I wound up in an argument with the theater's manager, who couldn't care less about consumer complaints and just wanted to refund my money and get me out of there. And so after a few choice words I left, never to return.

The nicer Cobble Hill Cinemas was glad to have me, and as it happened it was discount day, so I paid $3 less than I would have at UA...Hell. UA's slightly more convenient location has obliged me to patronize it these past six years, despite terrible reviews, cretinous, nachos-stuffed audiences to match the staff in intelligence and girth, and two smoky fires started by malfunctioning popcorn machines, or malfunctioning employees. Want proof of the decline of customer service, basic worker competency, and pride in one's profession? Look no further.
Posted by Robert Cashill at 12:26 AM No comments: Links to this post 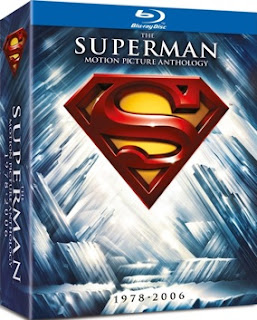 I have it on DVD, but the new Blu-ray incarnation of the five-year-old "Superman Anthology" leaps past it in a single bound. Or something.
Posted by Robert Cashill at 11:35 PM No comments: Links to this post 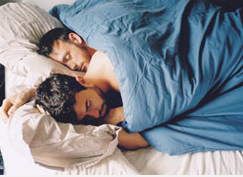 Staycationing cinephiles in the vicinity of the five boroughs are advised to trek over to the Brooklyn Academy of Music, where the BAMcinemaFest begins tonight. Propelled by a favorable review in Film Comment I saw the opening film, the British-made Weekend, last week and it's a keeper, a finely wrought gay romance...well, that's limiting. Yes, it's about two men inching their way toward some sort of commitment beyond a one-night stand, and an audience (gay or straight) underserved by the usual cliche-ridden love stories has reason to cheer a more serious one, not that the film lacks humor (or heat). This one digs deeper, and while not a suspense picture per se it builds considerable tension of a kind as the tentative, sort-of out lifeguard Russell (Tom Cullen, below in frame) hooks up with Glen (Chris New), a garrulous, probing artist...on the last weekend before Glen is to leave for Portland for a two-year fellowship. Andrew Haigh's film suggests Richard Linklater's Before Sunrise but the stakes are in their own way more urgent; a subtle sub-theme of the movie is how England's baleful surveillance culture (represented by security cameras around Russell's housing estate) deforms lifestyles, presenting another hurdle for the two very different men to overcome. A stimulating and rewarding start to what promises to be an excellent festival, Weekend is slated for fall release, but the filmmakers are trekking to Brooklyn to screen it...and so might you to see it.
Posted by Robert Cashill at 7:25 PM 1 comment: Links to this post 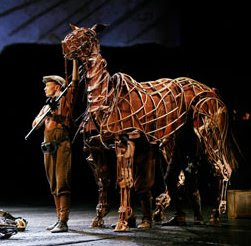 A chipper telecast almost disguised the fact that this was the most predictable crop of winners in recent years, with a few personal disappointments (Bobby Cannavale can console himself with his Drama Desk, and I don't get the Norbert Leo Butz love this time) but few surprises in the lot, not even in the design categories (which were shoehorned in more gracefully than usual), not that I'm complaining about my War Horse peeps. Congrats to Nikki M. James for shaking up her category with her supporting win but even that was part of a Book of Mormon tide (which, to be fair, did not carry away its lead actors). The 2011-2012 Broadway season begins on Tuesday with the opening of the most anticipated musical of last season, Spider-Man: Turn Off the Dark...and let me just say that if you enjoyed the ballad on tonight's telecast, those sweet and simple moments are few and far between.
Posted by Robert Cashill at 11:32 PM No comments: Links to this post

The Summer issue of Cineaste, online and on sale 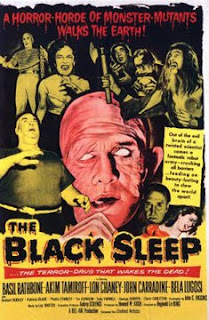 We warm up the season with a full slate of web offerings, including my own joint review of the MGM MODs The Black Sleep and Queen of Blood, and a terrific coffee table book, MGM: Hollywood's Greatest Backlot. Great stuff in the magazine, too, including Godzilla. Who can refuse the Big G?
Posted by Robert Cashill at 11:53 PM No comments: Links to this post 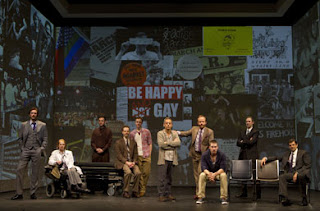 In other news I saw myself, sevreral times, at the Drama Desk Awards, which Ovation is televising in highly truncated but enjoyable form. Best times to watch for me: at the 46-minute mark, during the Newsical number about an hour in, and at the end under host Harvey Fierstein's credit. Closest I'll get to being a star.
Posted by Robert Cashill at 12:59 AM No comments: Links to this post 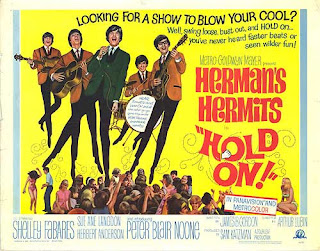 Manufactured-on-demand DVD-Rs bring John Lennon in Richard Lester's How I Won the War and Hold On! to light. Gotta love Herman's Hermits.
Posted by Robert Cashill at 10:56 AM No comments: Links to this post