Lure of the Piper 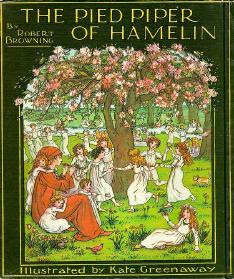 One of my movie wishes was fulfilled Monday night. Thanks to Paramount Pictures, which has provided a brand-new archival print, New York'a Anthology Film Archives has been showcasing Jacques Demy's The Pied Piper for what is a de-facto 35th anniversary engagement, which ends this Thursday. My Cineaste colleague and "Anthologist," Jared Rapfogel, tells me that, based on a request from the George Eastman House, Paramount (which almost certainly did not treat the film this cordially in 1972) was happy to provide the print, "so long as more than five people showed up to see it." On a frigid Monday evening, considerably more than five film cultists showed up at the 7pm screening, with many more queuing up in the cold to see the 9pm show; the house was just about full. The opportunity to see one of the great French director's most obscure features (his second, and last, in English) was just too good to pass up, temperatures be damned--though it must be added that the opportunity to see it with its star, the pop troubadour Donovan, in attendance for a Q&A was completely irresistible. Anthology's hook was well-baited for a dead-zone night in February, so out I went.

How far has The Pied Piper fallen off the cinematic radar screen? The plunge is so abyssal I couldn't find a single image on the whole WWW to filch for an illustration; even the star's website has only a single, meager black-and-white photo to show for an experience that he remembers well. [Problem solved, thanks to a reader; see below.] But the image I did swipe (I mean, pick) is at least apt, as the film, co-written by Demy, Andrew Birkin (currently Perfume: The Story of a Murderer, which with its mysterious interloper upsetting the bourgeois applecart bears some relationship)and Mark Peploe, of several Bertolucci pictures, quotes from Robert Browning's 1888 poem, as well as the Brothers Grimm story, and applies a critique of 20th century morality to the plotline.

The Pied Piper is one of those pictures that boggles our 21st century minds with its early Seventies G-rating: the atmosphere in the town of Hamelin is seamy, thick with the stench of adult hypocrisy, child exploitation and abuse is rampant, and the most sympathetic character, Michael Hordern's Jewish alchemist (who is unjustly blamed for the rat plague), is burned at the stake at the end--not as horrifyingly as Oliver Reed at the end of Ken Russell's The Devils (1971), maybe, but nothing you'd find as the capper of a Pixar cartoon, either. The entire mood of the piece, indeed, is closer to one of Hammer's pastoral horrors of the time(like Vampire Circus) than any children's film of its (or this) period I can recall, and is much more unsettling than its companion piece, Demy's bizarre and bawdy fable Donkey Skin, which was recently re-released. Today, just the unsavory presence of Donald Pleasence and John Hurt, as the town's most ignoble noble citizens, would land the film a PG-13. But it's Donovan's cheery, reassuring presence that is the film's scariest element; with the rest of the cast, you know where you stand, but there's no telling what goes on behind those mello yellow eyes. (He's no actor, but largely isolated from the rest of the adult cast and given less screen time than you might anticipate, he isn't used for his thespian abilities. His larger contribution, the 15 or so minutes of medieval-flavored score used in the film, is fine.)

And what a supporting cast Demy, the director of one of my very favorite films, the bittersweet and peerless The Umbrellas of Cherbourg (1964) imported to Germany. The late Jack Wild, a Supporting Actor Oscar nominee as the Artful Dodger in Oliver! (1969), had one of his biggest subsequent roles here, aiding Hordern's alchemist. In her first film, 11-year-old Cathryn Harrison (granddaughter of Rex) plays Hurt's intended; believe it or not, it was not her strangest assignment, an honor that goes to Louis Malle's unclassifiable apocalyptic fantasy Black Moon (1975), which will throw you for a loop the next time it airs on the Showtime channels, as it has been lately (every director, it seems, has to make an end-of-the-world type picture; The Pied Piper, which closes with the eruption of the plague and the literal fade-out of Hamelin's children, is Demy's). Burly Peter Vaughan (Straw Dogs and Time Bandits) plays the sanctimoniously red-robed bishop, the one who suggests that Hamelin's rats are a "Jewish problem," and writer-director David Leland (Mona Lisa) has a small part. Roy Kinnear, an indispensable presence in many Richard Lester pictures, is faultless as the fawning, obsequious burgomaster. I especially enjoyed seeing, as his status-conscious wife, none other than Diana "Swingin'" Dors, Britain's answer to Marilyn Monroe--that heyday didn't last, but she's funny here, not least when wearing a ram's horn headdress.

The costuming and sets, suggesting a medieval fair, are excellent. But The Pied Piper, as much as I liked seeing it, isn't quite a lost masterpiece. Demy had his DP, Peter Suschitzky (of numerous David Cronenberg films), shoot much of the film at a discreet middle distance, I suppose to capture the actors and settings in different tableaux, like ancient woodcuts; there are few closeups, and little cutting within scenes, and for as stylized as the film is a certain lassitude sets in by the midpoint. And I'm afraid the rats disappoint, as they so often do in movies. On the street, or scurrying about the New York subway tracks, they're properly verminous. But the plump, shiny-coated trained rats used in most films, like his one, are, well, kind of cute. In the film's most memorable image, which I'm sure Werner Herzog had in mind for his Nosferatu remake, they burst forth from a cathedral-shaped wedding cake. That worked, but they otherwise lack menace, a shortcoming of Willard and its sequel, Ben, which were highly popular at that time. There's much to appreciate about this Pied Piper but not much that really appeals. [I should add that the image was lovely but Anthology's sound system couldn't quite handle the audio.]

What, then, of the guest of honor? I've liked Donovan since his song "Atlantis" was used to accompany a ghastly murder in Goodfellas; I don't know if he appreciated that, but as he has no qualms about his biggest hits being recycled in commercials, and being an everthing-is-connected kind of person, I doubt he minded. He resembles a frizzier-haired version of the actor Peter MacNicol, and speaks in a hushed, theatrical cadence, appropriate for a mystic (he and David Lynch are currently odd-coupled trying to get TM taught in schools). He said he had little contact with Demy on set, as he played his part in the overall vision, but that Demy's wife, filmmaker Agnes Varda, was constantly second-guessing him, trying to get Demy to make more of a children's story and less of a modern-day metaphor out of the material. I saw who won that battle.

I asked him about working with the rats. "I had a kind of kinship with them," he said. "One made himself very comfortable on my shoulder. I looked at him and said, 'Who's your agent?'"

[Much obliged to wogggly@ix.netcom.com for the illustration...] 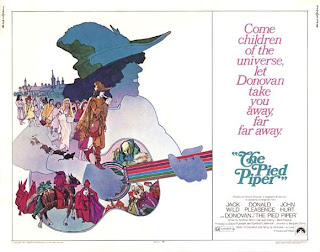