The Winter Cineaste, online and on sale 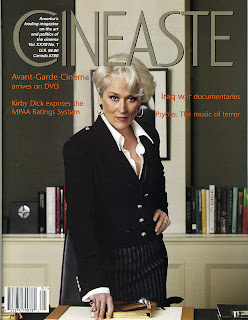 The new issue, and an improved look for our website, have arrived. Miranda Priestly wants you to check them both out...and whatever the Devil wants, the Devil gets. Pay particular attention, ahem, to the new Staff DVD Recommendations column, on page 73, and the Montreal World Film Festival roundup, on page 84.

A fine article by Susan L. Carruthers looks at films on Operation Iraqi Freedom, including a bit about the first feature to examine the conflict, Home of the Brave, which MGM opened today. The director, Irwin Winkler, has produced Rocky and Goodfellas, but battle-tested cineastes know that the possessory credit "A Film by Irwin Winkler" spells big trouble. 1992's remake of Night and the City had a fairly flavorful Richard Price script backing it but his other movies at the helm have been pretty disastrous, including the stickily sentimental Life as a House and De-Lovely, a movie musical so awful it made the immediate mothballing of the genre look like a sane and reasonable proposition. The stench of those failures hangs over reviews of the new film, but, really, it's not that bad, and Mark Friedman's script has some incisive moments to spice up Winkler's bland, small-screen style skills. As the war goes on with neither end nor victory in sight Home of the Brave is not a homecoming film in the tradiion of The Best Years of Our Lives but rather a requiem for those who have served and, uncomfortably, returned, in this case to Spokane, WA, an off-the-beaten-path location effectively captured.

Out of bad-ass entertainer mode Samuel L. Jackson gives a fine, subdued performance as a nightmare-haunted Army medic, traumatized by a massacre on the last day of his service, whose son (Sam Jones III) questions the war. The best and most touching performance is, surprisingly, given by Jessica Biel; a stunning objet d'art in The Illusionist, Biel is grittily convincing as a soldier who lost a hand in that same battle and finds her herself forced to adjust to more than a prosthetic limb at home. A more standard characterization is provided by Brian Presley, who feels lost and purposeless stateside without either his deceased best friend or a cause. I didn't know what to make of Curtis "50 Cent" Jackson, as a former soldier who spirals downwards into a life of crime; he commands attention but his gangsta patois is so thick I made out maybe 40% of his dialogue. And he figures in the silliest scene, a fast-food robbery that goes tragically wrong. (You know what happened--the film crew asked if Spokane could spare some cops and every single one showed up, to be a part of the movie. Not feeling inclined to say no, perhaps, the filmmakers had no choice but to fit them all in, and the sequence comes across as grossly overscaled.) But Home of the Brave is watchable--like Philadelphia, it may not be the best film to come out of its subject, but there is some honor in being first and not falling completely flat.
Posted by Robert Cashill at 1:47 PM