Tonys, and The Oscar 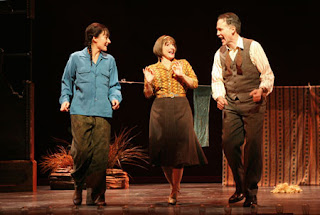 Being a Drama Desk nominator last season was so consuming, for so many reasons, that I had my own case of awards fatigue by the time the Tonys rolled around last night. I wouldn't call them anti-climactic, but for me they brought a kind of relief, signaling that the curtain had finally come down on a solid if unspectacular 2007-2008, much stronger on revivals than new work. Rapped acceptance speeches or not, the Tony-winning In the Heights is far more retro (and far less interesting) than the gold-plated South Pacific and Gypsy, whose Tony (and Drama Desk)-winning stars Laura Benanti, Patti LuPone, and Boyd Gaines are pictured. Onwards into the new season, as I take my seat off the aisle, observant if (happily) sidelined as we await our own co-production in August. [And then I'll learn what "tired" really is, and look upon those three-show-Sundays in the depths of winter nostalgically.]

As for last night's show on CBS, the nits are for picking, and given cellar-dwelling ratings we should as usual be grateful that the whole thing hasn't shuffled off onto the web, not that the Drama Desks are poorly served there. The musical numbers were abundant, too much so: To accommodate modestly lauded shows important categories were relegated to the pre-show, which when PBS used to show it was always a more unbuttoned, less bamboozling affair. I was miffed that best book of a musical was off the mainstage, but lumping best revival in steerage with the downtrodden designers (who got a "new" category, sound, recognized by other awards bodies for decades, to join them in their unfair exile) was unconscionable. Stranger, from a telecast standpoint, was announcing the choreography winner in that lost hour--viewers enjoying high-stepping highlights from Cry-Baby and In the Heights no doubt expected the payoff to come with a front-and-center awards announcement. That's showbiz.

Twelve hours later and it's all over except the annual keening over the golf- and basketball-challenged ratings. I would add that having Whoopi Goldberg host gave the broadcast a musty feel right from the start (since when was she last an arbiter of what's hip and happening? 1990?), but putting The Lion King in the catbird seat at the top of the telecast did at least bring things up to 1998. Best revival of a Drama Desk schtick (more than one acceptance speech had a familiar ring to it) went to Mark Rylance; I could feel America, or that small subset of America tuned to the Tonys, scratching their heads in puzzlement.

Now that the Tonys are dispensed with, it's time to think about The Oscar. No, not the award, but the deathless 1966 Joseph. E. Levine production, which gets a rare outing on Turner Classic Movies tonight at 11pm EST. In the new documentary Dreams with Sharp Teeth, Harlan Ellison says its star-laden belly-flop into the shallow end of the critical and boxoffice pool killed his screenwriting career. But it died with dignity; his hardboiled purplish prose is a constant riot. It’s hard to see how intended stars Steve McQueen (Ellison's pal) and Peter Falk might have improved matters, but Stephen Boyd and an earnest, preposterous Tony Bennett (!) really bungle the job, launching this one into camp heaven (it's harder still to imagine the academy countenancing such a project). Bennett, who took the still birth of his acting career in stride, later spoofed his role on SCTV.

It's fun to imagine Hymie Kelly, Bennett's character, musing about, say, Passing Strange star Stew as he does in the film. With apologies to Ellison: “You finally made it, Stew! Tony night! And here you sit, on top of a glass mountain called "success." You're one of the chosen five, and the whole town's holding its breath to see who won it. It's been quite a climb, hasn't it, Stew? Down at the bottom, scuffling for dimes in those smokers, all the way to the top. Magic Broadway! Ever think about it? I do, friend Stew, I do...”
Posted by Robert Cashill at 12:35 PM