That's the slogan John Waters found so funny as a way to attract tourists to his native Baltimore in the 1970s (it's still on a roadside billboard). Back when he was turning out his definitive tome on the place, SHOCK VALUE, it was amusing--but, thanks to canny redevelopment that hasn't entirely replaced the funk and formstone, it's actually true today. Baltimore does have its charms, and before I return to our usual programming I thought I'd blog a bit about my most recent trip to visit the in-laws. 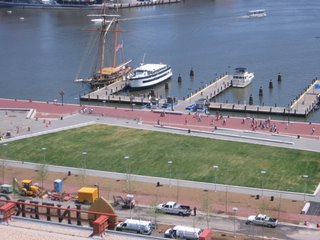 Our first view is of a patch of green. Not too exciting, unless you were one of the 136 guests at our wedding, who were as dismayed as we were that that section of the Inner Harbor, visible from the Intercontinental Harbor Court where we were wed (and where Lora's folks reside), had been torn up to make way for a bit of parkland. The park, happily, is now in place, though the surrounding structures are still a work in progress.

[Incidentally, the Harbor Court will soon be seen in the upcoming Nicole Kidman semi-remake of INVASION OF THE BODY SNATCHERS, titled THE VISITING. In a chase scene filmed at the hotel, she escapes through a secret passageway disguised by a painting, an actual feature of the place--not that it really goes anywhere, so you'd be body-snatched for sure if the scenario actually happened. Condo residents were costumed in black to play the bad guys, but Lora's parents, alas, were on vacation and not among their number. Keanu Reeves lived right next door to them when he was filming THE REPLACEMENTS in 2000.] 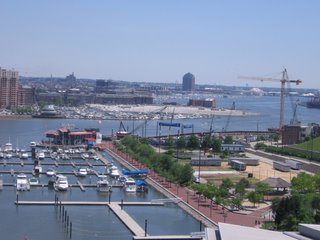 Here's another shot of mostly bare earth, which you can see in the background. [Not that the harbor itself, the linchpin of Baltimore's revival, is of no interest.] This is an EPA Superfund site that will soon be a Four Seasons complex, including the only cineplex for several miles. [The church we were married in is right next door to the city's entracing Art Deco showplace The Senator, which boasts Baltimore's own Walk of Fame, including the footprints of local luminaries Barry Levinson, Edward Norton, and Waters, once he was deemed fit for inclusion by city fathers he had embarrassed in the past with his ribald films.] Today it hosts Cirque du Soleil shows. But back when I first visited, in 2003, it was home to an enormous warehouse, that, mysteriously, kept burning every 20 minutes of so. Huge fireballs, then, nothing--and no seemed particularly fazed. We were fascinated. But we should have known, movie magic--the centerpiece conflagration sequences for the otherwise insipid LADDER 49 was being filmed there, before the structure was torn down. Amazing to watch as the flames shot up, were doused, then reignited as the cameras rolled. 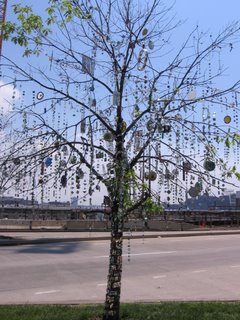 The "Tree of Glass" is part of the American Visionary Art Museum, which I finally got to a chance to visit. It's home to the creations by self-taught artists, and has some truly striking pieces, including a scale model of the Lusitania made entirely out of matchsticks. And a really great gift shop. Also, art by Rosie O'Donnell, whose credentials as an artist and a visionary are questionable, though she is undoubtedly American. 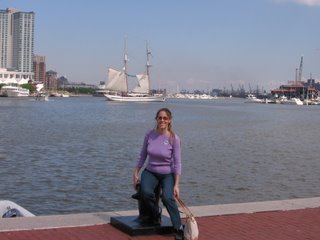 Finally, as our mini-tour around the harbor concludes, the Lady Maryland, foregrounded by a lady of Maryland.
Posted by Robert Cashill at 10:05 AM