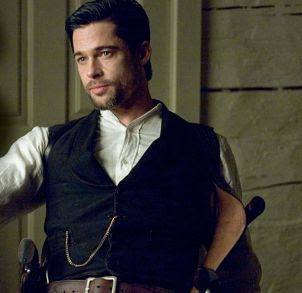 A film director of my recent acquaintance, a key figure in the 70s, says the current revival of "70's style" in a variety of films is bunk, that filmmakers should go their own ways and leave the trademarks of the past behind. For the most part, I agree; the one that seems to earn its keep is Zodiac, whose gloom-and-domm stylization is backed up by strong period content. That none of the films donning cinematic bellbottoms for a little with-itness has made a dime at the boxoffice probably means the trend will expire on its own before long, nonetheless it's interesting to see what's out there.

The Assassination of Jesse James...yeah, that's about as far as I got, too, with the title, though the key figure, the cowardly Robert Ford (Casey Affleck), makes up the rest of it. Andrew Dominik's second film after the brutal Chopper has a very strong case of Terrence Malickitis, with many minutes of Days of Heaven-type pastoral navel gazing beautifully (and I think indulgently) shot by Roger Deakins. The storyline took Sam Fuller not long at all to barnstorm through in 1949's I Shot Jesse James; putting on white gloves and observing tabloid material through God's eyes, Dominik clearly wants you to feel the exhaustion of life on the run once the Wild West capers are over, and it worked. I struggled to stay awake during its 160 minutes. Maybe Ron Hansen's book in its totality is more meaningful, but you don't really have to read it; large swatches of it are read for you in sonorous, soporific voiceover, like a book-on-tape left on in the theater. Brad Pitt, a natural James in a more uptempo treatment of the legend, like 1939's fun Jesse James or Walter Hill's The Long Riders, tamps himself down as Dominik puts on airs; Affleck is more hairtrigger, but the movie's fate was probably sealed when Sam Rockwell was signed to play Charlie Ford. Excellent actor though he is, his presence in any film is a sure-fire flop indicator. Still, Warner Bros., which clearly outlaid some cash on it, should be giving it more of a run; it'll probably be out of New York, its last stand marketplace, altogether by next Friday.

Writer-director James Gray has been making 70s-style films since 1994's Little Odessa, so you can't blame him for opportunism. Like The Brave One and the forthcoming American Gangster, his latest, We Own the Night, fairly reeks of nostalgia for the good old bad old days of New York. How much does Gray miss coke-fueled 1988? So much, he's hired former mayor (and current movie critic) Ed Koch to play himself, in a waxen extended cameo. For additional gravitas, Gray has hired the venerable Robert Duvall to play a police chief, but it doesn't pay off; at 76, and looking it, Duvall is too old to be walking a beat, and would be more convincing as the grandfather of Mark Wahlberg and Joaquin Phoenix's cop-and-shyster characters than their dad. Gray's typically heavy-spirited approach to material that Pat O'Brien and Humphrey Bogart would have run with in 1937, with credulity-straining reversals for 2007 audiences, tends to kill the fun where it lies, though his fidelity to somber, monochrome moviemaking is sort of touching. Id did like Eva Mendes' period hoop earrings, which are big enough to jump lions through.

Lars and the Real Girl is in here primarily because its central conceit, a sheltered, timid man's relationship with a life-size doll, was part of the kinky fun of 1972's cultish Private Parts. But this is actually a clammy comedy-drama from the principal author of the Six Feet Under HBO show, with the good and bad that implies. It's fated to be more commented about than seen, but Ryan Gosling, here with a paunch and mustache that suggest a tryout for The Lee J. Cobb Story, is always excellent company (think early Nicolas Cage) and the movie is restrained to a fault. Patricia Clarkson, a real doll, adds further perk as a most understanding therapist.

The best of the bunch is Tony Gilroy's Michael Clayton, one of the smarter entertainments of the year, with George Clooney an unabashed star as a law firm fixer caught up in corporate malfeasance. Gilroy, co-author of the terse Bourne pictures, lets the dialogue rip this time, and Clooney, an unhinged Tom Wilkinson, and co-star, co-producer, and 70s icon Sydney Pollack are a joy to listen to. It avails itself to the doomy atmospherics of Pollack's Three Days of the Condor but, like his better pictures, doesn't stint on crowdpleasing tactics that it comes by honestly. It's a movie about dirty deeds that has clean hands, and is as quotable as a David Mamet picture. This is the one 70s-styled picture that people will remember with genuine affection 30 years from now.
Posted by Robert Cashill at 4:24 PM

Labels: Film, Lars and the Real Girl, Michael Clayton, Movies, The Assassination of Jesse James by the Coward Robert Ford, We Own the Night