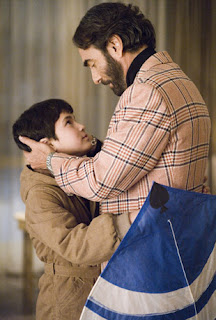 The film version of Khaled Hosseini's 2003 bestseller The Kite Runner has gotten all tangled up in sensitive cultural and political issues pertaining to Afghanistan, where it is set. (It was filmed largely in the mountainous regions of Western China.)
The New York Times has a comprehensive story about the various dilemmas, which have caused distributor Paramount Vantage to push the film's release from Nov. 2 to Dec. 14. The change in date may help the studio better reconnoiter a sticky marketing situation, but I doubt the storm clouds coming in from Afghanistan will blow over that easily.

We went to a screening of the film last Friday. Marc Forster, a flashy faux arthouse style director I have rarely liked (Finding Neverland and Stay being prime offenders on his resume), who raised red flags on this blog as the director of the next Bond picture, reins himself in at the helm. This is the kind of cross-worlds, time-spanning saga that Mira Nair (The Namesake) does better than anyone, and Forster offers a suitable approximation. I expected the film to be stuffed with multicultural gauze, but it's pretty spare on that front. The adapter, David Benioff, keeps the subject matter as sober and responsible as possible; it's a quantum leap past his silly script for Stay,
if not on the level of his assured self adaptation of 2002's 25th Hour for Spike Lee. I assume some of the creaky contrivances that reduce much of the second half of The Kite Runner to melodrama come straight from the source.

Still, the first half, focusing on the fraught relationship between two Afghani boys from different tribes, is affecting, and audiences are sure to watch much of it through through tears as their friendship dissolved under the weight of personal and ethnic tensions and the coming of the Soviet war in the 1980s. The boys, Ahmad Khan Mahmoodzada as Hassan, an illiterate Hazara, and Zekiria Ebrahimi as the better-bred Pashtun Amir, were paid little for their work on the $18 million film but are likely to be further compensated for their trouble--they are, however, worth their weight in gold to the picture, which rests largely on their natural appeal. The two boys share a mutual love of kite flying, and the competition sequences, a deft mixture of actual sport and CGI, are exhilarating to watch.

To Western eyes, the rape of Hassan, which Amir bears silent, frightened witness to, is sensitively handled, in an "impressionistic" (per The Times) way that doesn't push the PG-13 rating. The war now on and the friendship shattered, the film returns to its present-day framing device, where Amir (who escaped to America with his stern, withholding father) has published a novel about his childhood. A phone call summons him back to Afghanistan, which he is forced to sneak into now that the unforgiving Taliban are now in charge, and where he can make amends for his boyhood indecisiveness. There's plot turns here I really shouldn't spoil, but for as vile as the primitive Taliban can be I found it over the top that the teenager who raped Hassan is now a sect official, a deranged pedophile who has put together his own harem of boys, one of whom (the third boy, mentioned in the Times story, Ali Danish Bakhty Ari) is similarly threatened. It's not exactly a subtle portrayal, and I can see how the Taliban could turn it to their advantage, as an example of gross Western stereotyping, no matter that the source material was written by a local. Closer to home, I trust that audiences will make the necessary distinction between homosexuality and criminality, which we are meant to take as a given.

But as the communication of ideas brings peoples closer together, the more it can cleave them apart, and nothing can be taken for granted. However the story of The Kite Runner plays out, what we have are filmmakers doing as much as they could to be culturally correct, and making a respectable picture--but one that, just by touching on powderkeg issues, ignites a firestorm of wounded feelings, betrayed trusts, and the promise of worse to come. And all with very few of the upset parties actually having seen the film, which in and of itself is now virtually irrelevant--what counts is the first, visceral, unsubstantiated impression it makes, which can be downloaded as propaganda ripe for spinning.
Posted by Robert Cashill at 9:29 AM