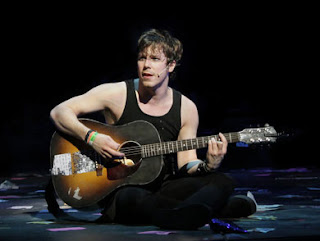 And I was there as Green Day took to the stage at the St. James last night to perform a couple of songs following American Idiot, the musical based on their album. It seems they're often there enjoying the show but this was the first time they'd become a part of it. The contrast between the show and the live performance was fascinating--if you think the show is loud, you ain't heard nothing yet--but they didn't upstage the adaptation, and rather complemented the piece with their own particular dynamism. That's star Spring Awakening Tony winner John Gallagher, Jr., a guy born to suffer in contemporary rock musicals, behaving himself in a relatively quiet moment from the production. Top that, Barbara Cook, I say, as I downshift into traditional musical theater mode for tonight's performance of Sondheim on Sondheim.
Posted by Robert Cashill at 1:03 AM