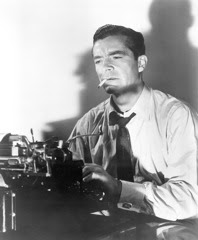 Last year's political thriller State of Play was pretty much an elegy to newspapers, and to a certain kind of fast-talking, deadline-driven movie. Film Forum relives the days of ink-stained wretches with "The Newspaper Picture," a month-long extra that begins on Apr. 9. Kicking off with Billy Wilder's caustic Ace in the Hole (1951), the series encompasses all kinds of headline-grabbers, including the early color horror film Mystery of the Wax Museum (1934), Samuel Fuller's excellent Park Row (1952) and Shock Corridor (1963), and two movies vying with Dr. Strangelove as most revived, All the President's Men (1976) and Sweet Smell of Success (1957). A special section is devoted to the films of the garrulous Lee Tracy, who turbo-charged every movie he was ever in, burnt out scandalously, then came back with a last, Oscar-nominated hurrah in The Best Man (1964). Hard at work on the five star final is Dana Andrews in Fritz Lang's While the City Sleeps (1956).
Posted by Robert Cashill at 7:29 PM