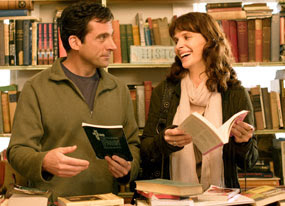 If you're missing Broadway due to the stagehands strike, get thee to the multiplex to see Dan in Real Life, co-written and directed by off Broadway veteran Peter Hedges. Hedges will always have a gold star affixed to his name for penning What's Eating Gilbert Grape, but the homey quality that draws people to this one is precisely the thing that repels me. A family that gets together to play competitive board games, have singalongs, and play charades? I love my family, at the holidays as much as any time, but, ugh, a true nightmare scenario for Bob in real life, include me out. (Hedges' more astringent indie take on get-togetherness, Pieces of April is more my speed.)

Selling the illusion of familial warmth and good cheer is, however, a supporting cast of stage veterans, exported to Rhode Island for the shoot. I think onscreen brothers Steve Carell (lightly charming but at the outermost region of his TV-bred talent, I suspect, as the widower Dan; his Hamlet we need not see) and Dane Cook are the only two adult castmembers without any stage experience, though Cook does hustle the crowds at comedy clubs. As their parents, Hedges has cast board treaders Dianne Wiest and John Mahoney, in full twinkle mode; as they woman they're both drawn to, the appealing but as always somewhat inscrutable Juliette Binoche, seen in the Roundabout revival of Betrayal a few seasons back. Alison Pill, currently co-starring in the still-running Mauritius, plays Dan's eldest daughter. Dan's siblings and in-laws are a clutch of Tony nominees and Tony winners: Amy Ryan, Norbert Leo Butz, Frank Wood, and the get-there-someday Jessica Hecht. (I'd pencil in their character names, but Hedges have given them little to do.) The recurring role of a taciturn comic cop is played by Light in the Piazza star Matthew Morrison.

So, not my kind of movie, though it was nice to see them. Better to see them in their natural habitat, however. As it is, the openings of The Seafarer and The Farnsworth Invention will have to be rejiggered, and as with the excellent Rock 'n' Roll, which I saw on Friday before helter-skelter came down, I suspect the UK-imported cast of the former is getting antsy. I don't know how it would conflict with the Hollywood writer's strike, but maybe Hedges has a trunk script they could all film to pass the time.
Posted by Robert Cashill at 8:13 AM