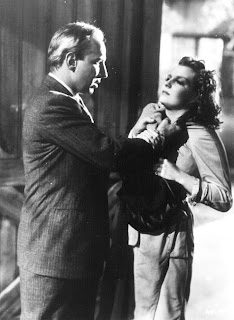 As "Guest Programmer Month" continues on Turner Classic, Simpsons creator Matt Groening has reeled in a live one for tomorrow night (Nov. 14) at 8pm EST--Anatole Litvak's delightful genre mash-up Blues in the Night (1941), which I don't think the channel has aired since I first saw it three or four years ago. Like Litvak's prior James Cagney boxing/musical melodrama City for Conquest (1940) but more unhinged it packs a whole bunch of stuff--gangsters, musicians, noir elements, "women's pictures"--into 88 breathless minutes. (Be sure, however, to record it for 100 or 105 minutes, not 90, in case the intro segment runs long).

Stay tuned for a fine cast of second-stringers (including Jack Carson, Priscilla Lane, and the pictured Lloyd Nolan as a mobster and Betty Field as the bad girl), the great, Oscar-nominated Harold Arlen/Johnny Mercer title tune (played every two scenes or so), and jaw-dropping montages directed by Don Siegel, later of Invasion of the Body Snatchers and Dirty Harry fame. In his autobiography motormouthed co-star Elia Kazan, an actor before he went behind the camera, warns "if Blues in the Night ever turns up on the late-late show I'd advise you to skip it," but don't; it's not on DVD or VHS that I know of and is a real find. I understand it's a favorite of Martin Scorsese, whose New York, New York is like a posher, molasses-slow version of its combustible predecessor.
Posted by Robert Cashill at 8:37 PM