Starting Out for the holiday 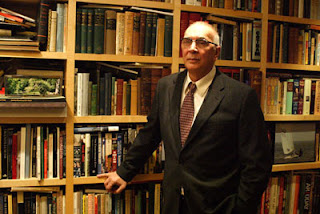 With Thanksgiving and the holidays upon us I urge filmgoers to treat themselves to Andrew Wagner's Starting Out in the Evening, which Roadside Attractions opens Nov. 23. There are many fine and thoughtful qualities to this adaptation of Brian Morton's novel but chief among them are Frank Langella's magnificent portrayal of an aging and faltering New York novelist, who is resuscitated in unexpected ways by an ambitious grad student, well-played by Lauren Ambrose, and the daughter who has always somewhat disappointed him, an engaging turn by Lili Taylor. (Adrian Lester brings increasing dimension to the fourth main character, Taylor's ex-boyfriend.) Langella may be our finest stage actor, a joy to watch in any vehicle, but he has never altogether clicked on film, at least not as much as he does here, where he surprises with the quietest, most hemmed-in performance I've ever seen him give. His body language, so sinuous as Dracula or awkward as Nixon in the play and soon film Frost/Nixon, seems to change entirely, drawing in on itself in carefully poised constriction, until circumstances force a change of habit.

Starting Out in the Evening is unabashedly literary in its overall tone but never dead on the screen, and is in welcome contrast to the more bombastic entertainments being offered up for seasonal distraction. If only there were more films like this one, a showcase for an extraordinary talent finally correctly applied for the medium, and not the completely dull and overrated American Gangster, the kind of blast from the past no one needs. Also worth viewing: The Coen Brothers' No Country for Old Men, but that doesn't need my modest soupcon of support as much as this sterling chamber piece.
Posted by Robert Cashill at 8:05 PM

Labels: Film, Movies, Starting Out in the Evening