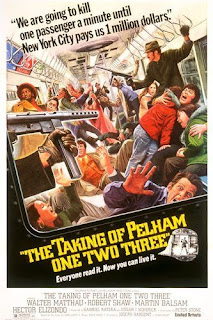 ...one unthinkable today, in our sensitive, post-9/11 world. Did it rankle New Yorkers in 1974, or were they too woebegone to care as the Death Wish-era city collapsed all around them? (A framed, full-size version hangs in the waitroom to the Magno screening room in Midtown.)

I bring this up to report that the minor classic of New York mayhem is being remade by slickster director Tony Scott in my neighborhood, for a 35th-anniversary July 2009 release. (There was a TV version in 1998.) I am living it: The gear and lighting trucks were out in full force near the Hoyt Schermerhorn station today, and I saw costumes being carted along State Street. It's the second big State Street shoot of the year, following the Coen Bros.' Burn After Reading, which opens in September. If I look harder I may spot co-stars Denzel Washington, John Travolta, and James Gandolfini, offering a temporary respite from the celebrity drought I commented upon a couple of days ago. But the original movie, with Walter Matthau, Robert Shaw, and a great cast of beat-up looking local talent, will be hard to top.
Posted by Robert Cashill at 10:05 PM