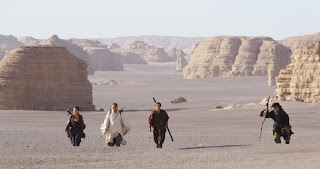 Twenty movies opened today in New York, which has to be a record (I think the previous high-water mark in city celluloid was 14). And I suspect the only two that will do any significant business are this week's action picture and last week's, reviewed here. Personally, I prefer Jackie Chan and Jet Li in the underrated Forbidden Kingdom over either of them, but that's got no kick left at the boxoffice. (Here they are trekking through some fascinating Gobi Desert locations.) Of the many newcomers, the three that interest me are the spy satire OSS 177, the delectable Famke Janssen as a pool hustler in Turn the River, and the Gallic gorefest Frontier(s)--but like most of this jumble of cinema I think they'll all be through the turnstiles and on their way to DVD before long.
Posted by Robert Cashill at 2:36 PM