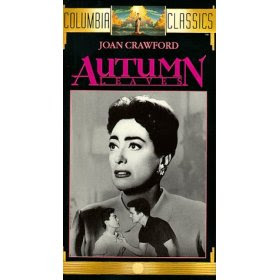 If 4 for Texas touches bottom for director Robert Aldrich, then 1956's Autumn Leaves is an unsung highlight of his career. Aldrich's idea of a "woman's picture" was not at all dainty: Physically and mentally, the likes of What Ever Happened to Baby Jane? (1962) and The Legend of Lylah Clare (1968) play rough. Coming at a time when Aldrich was making punishing pictures like Kiss Me Deadly, Attack!, and The Big Knife, Autumn Leaves is (as you can tell by the title) an unusually sensitive change-of-pace, not without cruelty but never unkind.

Its May-September success hinges on two thoroughly credible performances. In his second major screen role, after Picnic, Cliff Robertson gives a believably off-center performance as Burt, scion of a wealthy family. He strikes up an unlikely romance with Milly, a lonely middle-aged typist who sacrificed her youth caring for her ailing father, despite his protestations. Milly is played by Joan Crawford, in one of her finest performances. Her career was on the slippery slope toward camp at this time, in films like the Southern-fried family Gothic Queen Bee and the must-be-seen-to-be-believed musical Torch Song, and by Baby Jane? it had pretty much arrived. But Autumn Leaves and the cult WesternJohnny Guitar are high-water marks, and I don't think she was ever more vulnerable, and less guarded, than here.* Milly has two problems: Societal scorn for her romance, as in the more highly regarded Douglas Sirk picture All That Heaven Allows that same year, and Burt's creeping neurosis, whose root cause she goes through much trauma herself to uncover. Just when you've forgotten that you're watching an Aldrich picture, what with all the aborning romance and the lovely Nat King Cole title tune on the soundtrack, there is a horrific episode involving Milly's typewriter, a deal-breaker for most women trying to tough out an impossible relationship. But Milly carries on. Love hurts, Aldrich says.

Turner Classic Movies has a nice letterboxed transfer of Autumn Leaves in its library, which it will air Tuesday, May 27, at 8:45am EST, as part of a day-long salute to Robertson. Charles Lang's wistful, noir-inflected black-and-white cinematography, uncovering interesting facets of period twilight L.A., is well-preserved. It really should be on DVD but as the studios prepare to resell their biggest contemporary hits again and again on Blu-Ray I wouldn't hold my breath waiting. Aldrich fans, note that on Wed., May 28 at 7am EST TCM is airing 1957's The Garment Jungle, which the director was fired from, with two weeks to go in the shooting. [His replacement was old Crawford hand Vincent Sherman.]

*The script was co-written by the husband-and-wife team of Jean Rouverol and Hugo Butler, and has a nice give-and-take in the dialogue between the couple that could only come from lived-in observation. The two were blacklisted at the time, and the film co-credited to a front, comedy writer Jack Jevne. Butler died in 1968, the year they completed the screenplay for Lylah Clare. The 91-year-old Rouverol, a former actress who co-starred in the W.C. Fields classic It's a Gift (1934), appears as herself in the play adaptation Trumbo, which is being released this summer.
Posted by Robert Cashill at 12:39 PM