An honor for Atonement 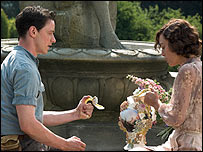 I should really say more about Joe Wright's fine adaptation of Atonement (pictured, with James McAvoy and Keira Knightley). Knowing it was due encouraged me to pull Ian McEwan's novel off the high shelf where it had rested since 2002, and reading it was a distinct pleasure for us both. I didn't quite see a film in there but quite a good one (better than The New York Times or Village Voice would lead you to think) has been wrested from McEwan's remorseless text, and I imagine it will do well for Focus Features with critics, audiences, and awards groups once it goes into release beginning Dec. 7.

Which is to say that with various engagements and assignments pressing I will send you to the National Board of Review, which has named it one of its top ten films of the year. (The very top honor, as the board kicks off awards season, went to No Country for Old Men.) One thing I can say for sure: It's a helluva lot better than the lachrymose The Bucket List, which I defy anyone outside of the voting bloc to recall a day after seeing it. (Some good calls on the acting side balance out the dud winners, which for me would include The Assassination of...Zzzz.)

And while I'm at it, having piggybacked off the labor of others, I humbly offer one of my periodic star lists, when I find myself unable to stop the march of time for anything more substantive...

There. Don't say I never gave you anything. But as always more to come.
Posted by Robert Cashill at 6:21 PM

I've heard nothing but good things about both ATONEMENT the book and film. Don't know if I'll have time to read the book first, but I'll give it a shot.

As for NO COUNTRY FOR OLD MEN, I'm going to see it tomorrow and will finally be able to get into the rather rich online conversation about it.