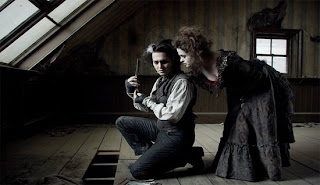 Theatergoers attending the tale of Sweeney Todd at the movies will have two films in mind: The one Tim Burton has wrought from Stephen Sondheim’s 1979 masterpiece, and the one you may have hoped for. That one would have stronger singer-actors in the leads. More of the score intact. And much less blood, after the first two or three slashings have made their point.

But this is very much Burton's show. Indeed, the material has been so strongly reconceived by the reigning director of movies macabre it's as if Burton approached Sondheim about writing a Sweeney Todd musical and the work commenced a few years and not three decades ago. Wary of the stodgy, museum piece treatment that Rent and The Producers received onscreen, Sondheim encouraged the cuts, but admirers of the score will be surprised at how deeply Burton dug in. For example, we no longer "attend the tale of Sweeney Todd"; shorn of stagy ensemble numbers, like the opening ballad, the film simply begins, with crimson rivers overrunning the titles and the swift set-up of the storyline. Adapting Hugh Wheeler's book, John Logan has condensed the storyline to a tightly compressed running time of under two hours. (Suiting the task at hand, Logan has a prior “killer” title, the recently revived off Broadway Leopold and Loeb dramatization Never the Sinner, to go along with The Aviator and Gladiator for Martin Scorsese and Ridley Scott.) The outstanding difference is one of tone: Burton, whose films since 1994's Ed Wood have largely been disappointing, clearly relished returning Sweeney Todd to its Grand Guignol roots, and audiences accustomed to the comparatively more restrained musical will be covering their eyes and ears and not noticing the absence of "Ah, Miss" and "Parlor Songs."

I suggest leaving them open, simply to enjoy the lush orchestrations (by Jonathan Tunick, wisely retained from the Broadway original) and the ripely decayed and decadent Victorian atmosphere conjured by production designer Dante Ferretti, in Hammer horror mode. Using the "bleach-bypass" technique that gave 1995’s Se7en its sickly serial killer sheen, cinematographer Dariusz Wolski has all but drained the imposing imagery of its color, the better for the red to stand out. Once Todd begins to apply his razor to his vengeance against an uncaring and hypocritical society, look out; the title of another current release, There Will Be Blood, could easily apply here (and there are also the sickening skull-crunching thuds of the victims hitting Mrs. Lovett's basement abattoir to contend with). You may wish that what Tobias finds there toward the climax, which the show leaves to our darkest imagination, had been left to our imagination. Burton, typically cock-eyed and whimsical toward violence, has never abandoned himself in this way before, and Todd's dehumanization is annihilating.

Less definitive is his choice of leads. To confirm what undemanding critics have written, yes, Johnny Depp can sing. But he cannot sing well. The committed intensity of his performance, in his sixth collaboration with the director--no cutesy pirate stuff here--is unmatched by his vocals, and his songs trail off. In this regard he fares better than Helena Bonham Carter, whose numbers as Mrs. Lovett never really begin. Giving Carter her due, it's by no means a clearcut case of nepotism that Burton has awarded his five-time co-star (and mother of two children) this plum role—downplaying the character’s slatternly side, she finds a note, a compelling one, of bedraggled sympathy. It is, alas, the only one she holds. In their pallid makeup, peculiar hairstyles, and Colleen Atwood's modish ragtag costumes the two look like Edward and Edwina Scissorhands (recalling Burton's benign barbering fable), and harmonize in Burton's off-kilter realization of "By the Sea" as a bright CGI fantasia. But no one will purchase the soundtrack album on their account. 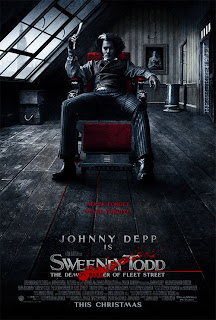 The supporting parts more evenly mesh acting and singing, and no one, fortunately, is asked to play an instrument, as in the revival Broadway Todd. Cast as the rancid Judge Turpin and the loathsome Beadle, Alan Rickman and Timothy Spall are spot-on, and their guttural vocals are acceptable. Better than that is Sacha Baron Cohen, in a delightful "who knew he had it in him?" performance as Pirelli, a sparklingly mischievous turn reminiscent of Peter Sellers. Vocally, the heavy lifting is reserved for Jayne Wisener (as the innocent songbird Johanna), Jamie Campbell Bower (a strong Anthony), Laura Michelle Kelly (the West End's Mary Poppins, near-unrecognizable except in talent as The Beggar Woman), and especially Edward Sanders, as Tobias. Casting a boy as Tobias adds a discomfiting edge to the story when you're used to the character being played by a young man, and he is terrific, on his own or carrying Carter through "Not While I’m Around." Oliver! should be revived just for him.

Sweeney Todd is a film musical informed by a strong central vision, and not its composer's. It may be the first of its kind to appeal to the crowd that lapped up Saw and 300, but its nihilism may not go down easy with them, either. DVDs of George Hearn and Angela Lansbury in the original production, and a concert staging with Patti LuPone, exist for purists, and will co-exist, however uneasily, with the extra-rare meat pie Tim Burton has carved up for the movies.

(This review was written for the New York Theater News site. Look for an appropriately short review of the off Broadway production of Beckett Shorts at the same URL.)
Posted by Robert Cashill at 2:15 PM