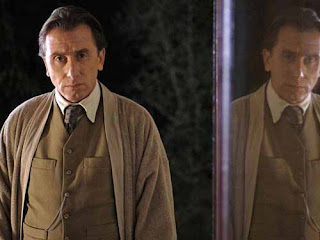 I always figured eternal life would get boring after a while, and Francis Ford Coppola confirms my suspicion with Youth Without Youth, an inert thumb-twiddler that Sony Pictures Classics opens tomorrow. "Cinema without audiences" read Variety's unfortunately on-the-mark pan, and any audience drawn to see the director's first film since John Grisham's The Rainmaker a decade ago will soon find themselves in an altered state--not like the one confounding Tim Roth's professor character, but one of grouchy sleepiness, struggling to stay awake as Coppola pushes metaphysical ideas around his plate.

No garden-variety auteur, pursuing variations on a theme, Coppola has always been a restless talent, and has put up with critical and commercial shrugs before. The many fine commentaries he has contributed for his past work on DVD, as he reflects candidly on ups and downs, can be enjoyed. But the new film is the worst kind of personal project, the type that stimulates and amuses its author and no one else. Richard Kelly's Southland Tales has numerous lapses; still, you sense that Kelly is trying to engage an audience as disenchanted with the American identity as he is, and his stumbling around with loopily explained concepts, zeppelins, and a cast stronger on personalities than actors is rather touching. It's never gratingly awful. Youth Without Youth, however, comes close; its basic torpor is an asset insofar as the film registers as a near-complete blank, which the memory banks erase once the lights have gone up.

Based on a novella by Mircea Eliade, the 1938-set Youth Without Youth casts a bedraggled Roth as the 70-year-old Dominic Matei. Gripped by an existential crisis, Matei plans suicide, but a lightning bolt not only shocks him to his senses, it hurls him back into his 35-year-old body. His doctor (Bruno Ganz, recalling, as he always does, better days with Wim Wenders and Wings of Desire) considers Matei a living miracle; the Nazis, in his native Romania, a potential weapon to be exploited. As an American agent (a cameoing Matt Damon) briefly enters the picture the notion that this might lead to a thriller comes into view, but this slender reed of hope that a film already going in different directions will center itself is quickly dashed. Matei resumes his lifetime study of languages, a pursuit complicated by a taunting double and what can be construed (warning: fog alert) as the reincarnation of his lost love, very blankly played in both incarnations by Control co-star Alexandra Maria Lara. The film then dissolves into a series of digressions, about the nature of love and language (Lara's troubled present-tense character is speaking ancient tongues, never a sign of functional mental health), good and evil (Matei uses telekinesis to kill a meddling Nazi scientist, a power brought up, then left dangling), past and present, Indian teachings, and more, all insufficiently dramatized by Coppola, as writer and director. (The official press kit synopsis goes on for pages, and is less help than this synopsis of it. His editor, the gifted Walter Murch, is unable to parse all the loose ends.)

On some level, Youth Without Youth is another take on his Dracula, warmed over for pedants. I think that Coppola (who recently played the part of a gnocchi-preparing paisan, his winemaking alter ego in full flower, on the Martha Stewart show) wants to say something about the frustrations of a creative life through this material, but it never cuts through through the philosophical haze and technical matters like the poor dubbing of the supporting cast. The in-camera special effects and antique titles have their charm, and a radical note is struck when the film climaxes right at the end card--an abrupt conclusion to a movie that never really began, just unspooled. With the passing of Youth and whatever anxieties and hesitations were gnawing at him Coppola's return to active moviemaking duty is awaited.
Posted by Robert Cashill at 8:55 PM