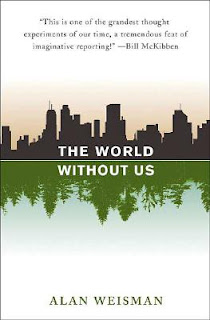 Mobius Home Video Forum correspondent Wade Sowers reminds me that 1959's The World, The Flesh and The Devil, with Harry Belafonte, did the whole abandoned New York sci-fi premise sans effects almost 50 years ago. Here's a
picture. I'm surprised TCM isn't showing it (or the two other Legend versions) to tie in; it has a tense ending, with Belafonte and bigoted Mel Ferrer stalking each other through the empty streets with rifles. (2001's non-apocalyptic Vanilla Sky also managed the same trick in Times Square, without apparent enhancement but with plenty of people wrangling in the small hours of the morning. Filmmakers looking for that deserted sidewalks feeling in the city know they can get it without too much effort by shooting on barren Wall Street on weekends.)

New York has long been a filmmaker favorite for disaster scenarios, as far back as 1930's earthquake-and-flood epic Deluge. As the city cleaned up in the 90s the movies were hellbent on destroying us; 1998 alone brought the asteroid two-fer Deep Impact and Armageddon, plus the Godzilla remake. There was a post-9/11 moratorium but the trend came back with a vengeance with 2004's The Day After Tomorrow. At that time I proposed an article for Slate that I called "It's OK to Kill New Yorkers Again" but they didn't bite; I did, however, just see a similar piece somewhere hooked to I Am Legend. And this new book (pictured), by Alan Weisman, looks interesting; I asked Santa for it, and I trust it will arrive unless our newly installed tree is vaporized in some catastrophe.
Posted by Robert Cashill at 1:43 AM