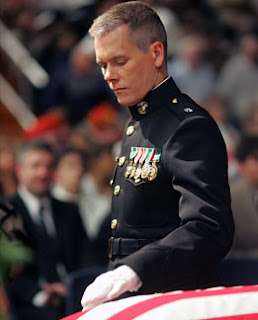 The HBO film Taking Chance, which first aired last month, is its most-watched original production in five years, and I finally caught up with it. A taciturn Kevin Bacon plays the real-life Michael Strobl, a retired U.S. Marine Corps officer and Desert Storm veteran, who in 2004 escorted the remains of slain Iraq War soldier Chance Phelps to his home in Wyoming for burial. Phelps, a private first class, was 19 (he has posthumously promoted to lance corporal). Strobl's experiences on the road form a mosaic of grief for the young man and, by extension, his fallen comrades, which the movie presents to us in a movingly edited montage of reflective moments culled from the film (which runs a brief, and stately, 78 minutes). Upping the emotional ante, pictures and video footage of Phelps are shown as the movie ends. You won't come away unmoved.

But I question a recent Wall Street Journal editorial on the production, which suggested that this is the sort of Iraq War picture Hollywood should be making, not hand-wringing, hopeless flops like Stop-Loss and Lions for Lambs. I'd agree that those movies could be better, and I can't blame audiences for tuning out their gloom and doom. But there are some things they get right about the toll the war has taken on its combatants and its country, raising questions that fall outside the consciously apolitical scope of Taking Chance. It may be, too, that for most Americans this war is a TV war, and treatments of it are more suited for TV.

Or--and this is something conservative outlets are unlikely to consider, or support--it may that the war's absence from television, and specifically coverage of escorts and processions like the one depicted in the film, is the exact reason for its success. The Bush administration vetoed such news from the homefront, and to its credit the Obama administration is reversing those polices. As Taking Chance shows, it is neither tasteless nor exploitative for the media to take stock of our lost soldiers. The film, which Strobl co-wrote, opens the door on this "taboo" area, and as a nation we will be all the better for being able to see what this war is costing us every day.

For New York theater watchers, Taking Chance is notable for the many decorated actors in its supporting cast, including Julie White, Danny Hoch, Tom Wopat, Matthew Morrison, and, in a vivid scene, Tom Aldredge. Coincidentally this weekend, HBO telecast live the penultimate performance of Will Ferrell's You're Welcome America: A Final Night with George W. Bush, the record-smashing show that single-handedly salvaged the Cort's reputation as a flop house. I relished the prospect of Bush being taken down, but outside of a few inspired moments the show fell flat, and not just because filmed live performances tend to waver into static outside of the room. 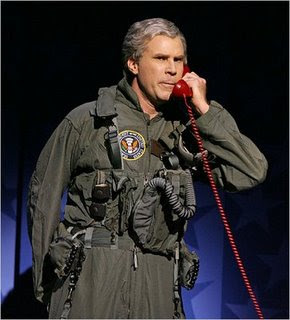 As Ferrell's movies tend to do the production too often confused coarseness with humor, and the Bush onstage bore scant resemblance to the one we were stuck with for the better (or worse) part of this decade. On paper, and on Saturday Night Live, the affable frat boy dunce personae of Ferrell and Bush were evenly matched, but the show missed the scary part of Bush, which Oliver Stone's more considered (and funnier) W. got: He believed in everything he did, even when he delivered the latest bad news initiative with that nervous, unnerving smirk of his.

The Bush show did not end as Ferrell's Bush show did, with the president giving us the finger (a gesture partially obscured by a departing audience member); history be damned, he thought he had done well by his country. But Ferrell wants to drop the facade to let us to know what he thinks, or, more to the point, what he thinks his presumably liberal audience thinks of the departed president. (It's hard to see Ferrell getting exercised about anything.) In the show's weirdest and most uncomfortable moment, Ferrell-as-Bush stopped with the sophomoric jokes for a moment of silence for the victims of the Iraq War, a messianic gesture that was wrong-headed on numerous levels. If the right's sanctimony over coffins and funerals is finally at an end, I think the left should have to give up its smug superiority. As our new president counsels, we're all in this together.
Posted by Robert Cashill at 4:11 PM