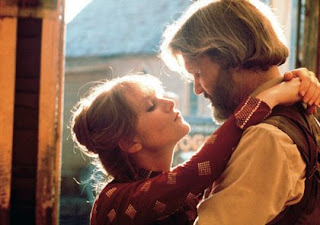 Nothing about Heaven's Gate (1980) inspired the warm-and-fuzzy feelings that Isabelle Huppert and Kris Kristofferson express in the film. The title quickly entered the lexicon as synonymous with waste and egos run amuck and everything bad about Hollywood filmmaking. But out of the catastrophe sprang one of the best books ever written about the production of a movie, from the United Artists executive in the belly of the beast, 1985's Final Cut, in which Bach details the "dreams and disaster" that attended the production. The book led to a good documentary that has yet to find an official home (I saw it on cable) but can be viewed on YouTube.

The movie has improved with age--not great, but greatly interesting, with knockout visuals and powerful sequences once it finds its feet. It's one of the last 70s movies, released after the decade, and moment, had passed and the powers-that-be upset over the headlines it generated turned decisively against those crazy auteurs (Cruising and Cutter's Way are two others). The book, written when the wounds were still fresh, is terrific. I haven't read his subsequent bios of Marlene Dietrich, Moss Hart, and Leni Riefenstahl, but they are well-regarded. It's hard to imagine a studio executive today with his insight and erudition, a breed that was also shown the Gate.
Posted by Robert Cashill at 8:20 PM