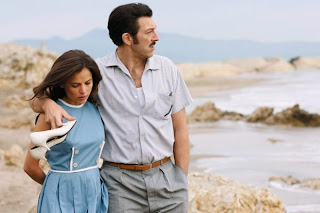 The Film Society of Lincoln Center presents its annual Rendez-Vous with French Cinema, from March 5-15. A couple of Fridays ago I spent all day rendez-vousing with the two-part Mesrine, the Che of French gangster pictures, at least in length. Unlike other films at the festival--I've seen several good ones that simply vanished afterwards--Mesrine, starring the excitable Vincent Cassel (pictured in a rare quiet moment), will get a release, in August. One part was enough for me, but it has drive.

BAM salutes, and not for the first time, distributor IFC Films on March 6-12, with a program that includes the Bobby Sands drama Hunger and an intriguing-sounding Korean film, The Chaser. The Italian crime picture Gomorrah , an IFC release, starts a run there on Friday. It's big of BAM to toast IFC when it has its own venue in Manhattan, but it's tough on indies and I guess it's best for everyone to stick together.
Posted by Robert Cashill at 2:52 PM