Hillary at the movies 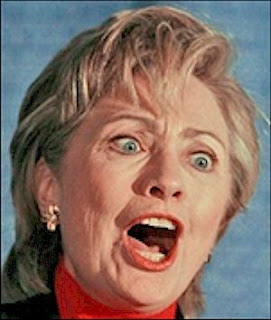 I've never liked Hillary Clinton. Not her politics, just her. She's like a fourth grade teacher I had who yelled at me for being too "creative." But that schoolmarmish, vaguely disapproving tone she struck as first lady has softened, or at least modulated, over the years, and she ran a pretty good presidential campaign that went the distance, which I admire. So I'm mostly over my disdain, and never had any qualms about her as senator or Secretary of State. (Someday, Hope Davis will have the role of a lifetime playing her.)

Her blood enemies, though, continue to make noise, and they've reached the Supreme Court with one of their outrages, a movie (or "movie") called--Hillary: The Movie. The mud-slinging therein begins with the trailer, which, cleverly, opens with Barack Obama taking the offensive, so you don't think it's a partisan effort. The whole thing, which was disseminated last January on DVD, seems to be on YouTube, but I don't have to a shovel big enough to dig through it. The Supremes seem to be leaning toward the free speech side of the problem, which is good and not-so-good. I don't like the idea of corporations that put money into shows like this having free-speech rights, but maybe a few trees might be saved by regulating the political "memoirs" that clutter up bookstores in election years. To paraphrase Oliver Hardy, it's another fine mess Hillary has gotten us into to.

In any event, here's the trailer. It's like the 90s all over again. Try and guess the year via Hillary's hairstyle...and our young president looked so much younger at the start of the campaign.