Planet of the Vampires: The Opera 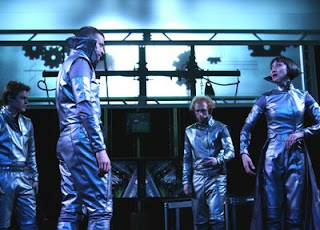 With vampire musicals having been staked on Broadway (that is, still someone decides to set Twilight to song and ignite the next would-be Wicked craze for squealing girls), bloodsuckers have joined the raanks of the avant-garde. The Wooster Group's latest concoction, La Didone (pictured), mixes Francesco Cavalli's baroque opera with a design inspired by Mario Bava's cult classic Planet of the Vampires (1965)--gotta love those metallic spacesuits. I have a feeling the clip online at the St. Ann's Warehouse site is sufficient to sate my appetite, but if the spooky giant skeletons that are part of the movie's mise-en-scene (which influenced Alien) are included in the mix I'll hop a train and go Bava-esque in Brooklyn.
Posted by Robert Cashill at 1:06 PM