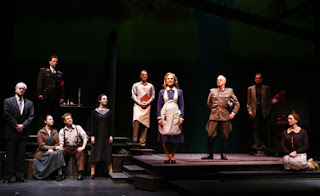 I took in a preview performance of Irena's Vow (pictured) yesterday at the Walter Kerr. A hit Off Broadway, it should be equally well-received when it opens tonight, judging by the tumultuous curtain call. Tovah Feldshuh, who plays the real-life Polish Catholic servant who sheltered 12 Jews in a Nazi commandant's home as the Holocaust raged outside her doorstep, then graciously ceded the stage to Irena's daughter, who spoke movingly of her mother and answered a few questions. (Be sure to ask her about the commandant's fate. It's a play in itself.)

Afterwards, I looked at the Playbill bios. Feldshuh's takes up most of a page, but I don't deny her the space. She's accomplished, and may very well add another Tony nomination (and perhaps a first-time win) and Drama Desk accolade to a string of awards. She's gone the distance in showbiz and it's OK for her to recount the miles.

Buy playwright Dan Gordon's entry gave me pause. It begins: "Dan Gordon (Playwright) is a master storyteller who creates indelible characters and relationships, which have afforded actors the opportunity to play some of their most unforgettable roles." It sticks in the craw. I'm sure that kind of self-salesmanship goes over well in Tinseltown, where arms are permanently out of joint from everyone's patting themselves on the back so much, but it's unseemly for Broadway. A simple record will suffice. And the bloviating is unearned. I'm pretty sure Denzel Washington puts The Hurricane, which Gordon wrote, fourth or fifth on his list of accomplishments--which is to say, far ahead of where the actors involved in The Assignment and Murder in the First probably list those forgettable credits. It's nice that he's keeping Josh Hartnett and Linda Gray employed but master storytelling doesn't necessarily factor in when remounting Rain Man and Terms of Endearment for the London stage. You've delivered the goods this time, so stick to the facts and get on with it.

I like Susan Sarandon's Playbill bio for Exit the King, another worthy show playing on the Main Stem in a good season for plays. This is it in its entirety: "Susan Sarandon (Queen Marguerite) is a mother, actor, and activist. She is very happy to be returning to Broadway for the first time since she appeared in the 1972 production of Gore Vidal's An Evening With Richard Nixon." Very classy. Learn from it.
Posted by Robert Cashill at 12:21 PM

Embarrassing Playbill bios have been a part of Broadway as long as Playbills. There are cringe-inducing ones in every program. But you're right: Gordon's is hard to swallow. Also, for me, that first line in Sarandon's is hugely self-serving. Most of the older actresses on Broadway are mothers. Who puts it in the first line of their bio, like it's a credit? And activists are best seen and not heard. The rest of the bio is fine, as you say.

I think Charles Isherwood may have in some way been responding to that bio when he panned the show in the Times. Funny, I didn't even notice the "mother" bit in Sarandon's blurb, but it's better than thanking God for getting her up on the stage.