Watchmen, by the clock 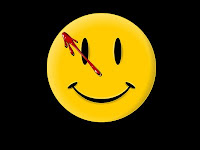 The first R-rated superhero extravaganza, Watchmen, debuted at No. 1 at the boxoffice, with the biggest number of the year to date, but in relation to the cost of the picture and the expectations that every movie with Spandex outfits, masks and capes create, the performance was somewhat less than brawny. The Wall Street Journal wonders why.

"Like 300, Watchmen features no major movie stars, but its unusually long running time of two hours and 40 minutes also may have contributed to its slightly weaker-than-expected box-office performance, says Dan Fellman, president of domestic distribution at Warner Bros. "I think it's entirely due to the running time of the movie," he says. "We just didn't have the turnover we needed at the theaters with just one main show a day."

Even with fewer show times during prime evening hours, Watchmen sold out nearly every IMAX showing, bringing in $5.5 million at those 124 theaters -- just below Dark Knight's record-setting $6.3 million. "If we didn't have such a long running time, we probably could have caught Dark Knight, Mr. Fellman adds."

Is that so? Checking the IMDb, The Dark Knight runs 152 minutes; Watchmen, 163--a difference of 11 minutes. Negligible, in other words, where scheduling is concerned. Perhaps some other factor is to blame, like, the R rating? Overhype? Or, Superhero fatigue (which would surely worry the studios, given the sheer tonnage of stuff on the drawing boards)? Boredom with graphic novel adaptations (the Alan Moore-derived V for Vendetta didn't overexert the turnstiles, either)? Spring awakening as sections of the country emerge from hibernation and indoor amusements?

Could be a lot of things, but it's not the minutes. If only The Dark Knight had been, say, 122 minutes, I might have liked it more. One hundred and sixty-three seems an awful long time to spend watching the Watchmen.

(Left out of all this simplest-answer-will-do boxoffice dissection is how lame the movies are, or I should say, seem to be; I have neither the time nor the inclination to keep up. Depression-era audiences got King Kong and My Man Godfrey; we get Watchmen and Paul Blart: Mall Cop. The scripts need a stimulus package.)
Posted by Robert Cashill at 11:34 AM